I’ve been hearing a lot of hype about Traffic Ultimatum for the past week. Is it a scam or the real deal? I decided to try it out. Here’s my initial review. 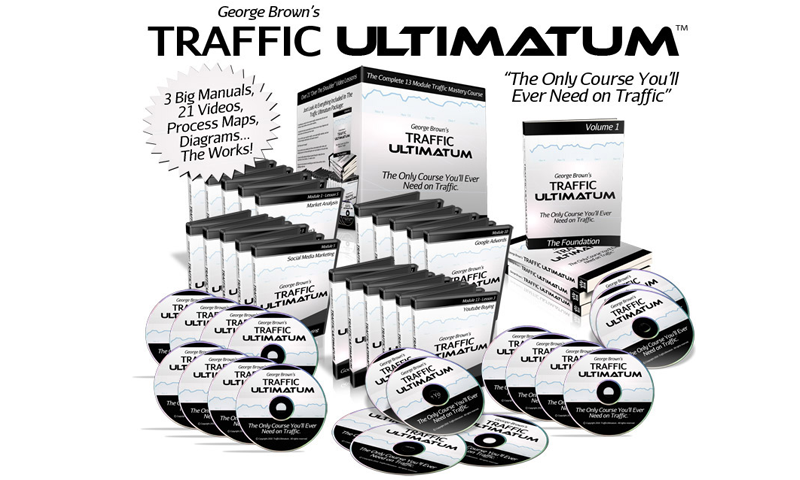 In my quest to make money online, I have fallen victim to a few Internet marketing and ebook schemes that were completely worthless. I already knew the marketing methods, tricks, or techniques that these guys were talking about, but they made it sound like they were referring to something nobody had ever done before.

Back then, I really wanted to be able to make money online and I was naive, so I took the bait (like most newbies do) and found out for myself what a complete idiot I was to fall for those scams. After a while, I came to accept that these “mistakes” are part of the learning process and the money I wasted buying those worthless ebooks is the “tuition fee” that I have to pay toÂ  learn the tips and tricks in Internet marketing and making money online.

So over the past week, I’ve been hearing about George Brown’s Traffic Ultimatum. I didn’t know who George Brown was and, when I first visited his website (www.trafficultimatum.com) and saw his video, I was laughing my ass off because it looked so fake — he’s a kid but his voice sounds like James Earl Jones’s. I thought it was voice dubbing gone wrong. Hilarious!

Why I decided to try Traffic Ultimatum

Like I said earlier, I’ve become wary of Internet Marketing schemes like this one because of the negative experiences I had before. But I kept hearing about Traffic Ultimatum all week long. So I decided to take a closer look at George Brown’s website.

At $197, Traffic Ultimatum is expensive. This was one of the factors that was holding me back. What if this is another scam? What if I’m not able to make money after I duplicate the methods that George Brown describes in the ebook?

Then I saw something else on the website — a 60-day money back guarantee. That means that if I am not happy with Traffic Ultimatum, I can get my money back within 60 days after my purchase.

With that 60-day money back guarantee, plus all the hype I’ve been hearing on the Internet, I decided to take the bait. This better be good, Georgie boy!

At this point, things are looking great. I’ve gone over the Table of Contents of the three ebooks that are included, and they look pretty comprehensive. There are around 20 videos that I’m hoping to be full of new stuff I could use for niche marketing.

I have to admit that there are quite a few methods in Traffic Ultimatum that I have not heard before.Â  For example, I didn’t know that you could buy links on YouTube videos that are getting lots of hits. I didn’t think about that.

I’ve only gotten halfway through the first ebook called “The Foundation” and I’m already learning lots of new stuff (at least new to me). Stuff like finding a niche using Google Trends, Yahoo! Buzz, Amazon Bestsellers, to name a few. These are all new to me. Up until now, I’ve only been using Google AdWords Keyword Tool and Market Samurai (another great keyword research tool).

I’ll continue reading Traffic Ultimatum and I’ll keep you posted on what I think about it as a traffic generation system.

Gmail detects when you forget to attach a file for sending

Our Noble Samurai friends are offering 50% discount on their excellent SEO and keyword research tool -- Market Samurai! Hurry and get your copy...
Read More

I just received this PremiumPress coupon code earlier today and I thought I'd share it with you, in case you're thinking about buying one...
Read More

ON ONLINE #4733 charge on your credit card bill?

I saw a credit card charge for $72 from ON ONLINE #433. It looked suspicious so I decided to look into it.
Read More