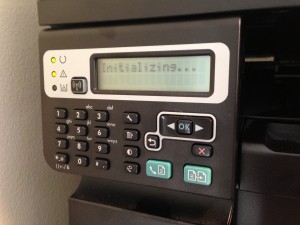 I couldn’t print from my trusty old LaserJet M1217 nfw MFP printer this morning. And when I rebooted it, the printer display showed “Initializing…” and then appeared to shut down and reboot again. It went on like this for a few times until it became obvious that there was something wrong.

So as usual, I asked Miss Google (most people call her Mister for reasons I do now know) for the answer. I found several different solutions, but only one worked for me so I’m posting the instructions below.

Note: This solution may also apply to other LaserJet models. So you’re having the same issue (your LaserJet printer is stuck at “Initializing...“), you might want to try this fix.

You should now be able to print from your LaserJet printer again.

Did it work for you? Let us know by leaving a comment below.

This site uses Akismet to reduce spam. Learn how your comment data is processed.